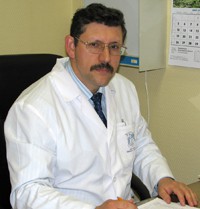 Doctor of medical sciences, professor. The head of Clinic of Svt. Luka's Institute of Child Neurology and Epilepsy.

In 1990, he successfully defended his master’s degree which was devoted to epilepsy and in 1997 – his doctoral thesis entitled "Idiopathic generalised epilepsies: diagnostics and treatment".

Prof. Mukhin is actively involved in the doctor’s training, as well as in scientific and practical work. He is a medical consultant for the Russian Children’s Clinical Hospital and the Children’s Psychiatric Hospital N6.

Among the main priorities of his scientific and practical activity are childhood epilepsy and clinical electroencephalography. He is an author of 5 monographs, including the reference book on epilepsy and "Atlas of electro-clinical diagnosis of epilepsy". He is an author of more than 150 publications published in Russia and abroad. Prof. Mukhin is a scientific consultant of the laboratory of video-EEG monitoring. He worked in a number of European countries (Germany, France, Italy) and undertakes collaborative research with German experts (professor H. Holthausen, professor H. Von Voss). Prof. Mukhin is a full member and expert of the European Epilepsy Academy (EUREPA), deputy editor-in-chief and co-founder (together with Professor Andrey Petrukhin) of the Russian Journal of Child Neurology. Prof. Mukhin taught neurology and epileptology at the faculty of advanced medical studies, RSMU. Among his listeners were doctors from Russia, Kazakhstan, Azerbaijan.

Prof. Mukhin diagnoses epilepsy (the exact type), differentiates epileptic from non-epileptic seizures (e.g. fainting, neurotic disorders), determines any cause of the disease, conducts treatment. The medical aid includes the personalised treatment approach for patients with epilepsy based on the current European guidelines on treatment of these disorders by using the modern drugs. Furthermore, he has a 30 years’ experience in treating children with epilepsy.